With a strong move towards fast-tracking self-reliance of Indian Aerospace, Defense & Internal Security, India Electronics and Semiconductor Association (IESA), inaugurated the two-day annual flagship event DEFTRONICS 2017. This year, IESA chose Hyderabad, an emerging technology hub in the country to boost the ecosystem and create a conducive environment for local manufacturing of products for local and global markets.

Hyderabad has emerged as one of the major destination for IT companies and is an emerging market  for companies to set up their manufacturing units. DEFTRONICS in Hyderabad will discover game changing ideas, address key concerns and create opportunities to build India’s Strategic Electronics ecosystem for greater self-reliance in areas of Defence, Aerospace and Internal Security.

The Indian Aerospace & Defense Industry is one of the fastest growing sectors with an ocean of opportunities for manufacturing companies. India’s Defence budget for 2016-17 has over INR 2.6 lakh crores, of which about INR 85 thousand crore has been allocated for capital expenditure. The country’s current requirements on defense are largely catered by imports, which changes with the new Defence Procurement Procedure (DPP 2016) and National Civil Aviation Policy (NCAP 2016) that highlight the intent of the Government of India to alter the scenario. The Global OEMs and Indian companies alike are keen to leverage this opportunity to make India a major Aerospace and Defence hub. With this event, IESA would be addressing the various challenges and opportunities to provide a guiding light to the industry stakeholders, thereby strengthening India’s manufacturing ecosystem. 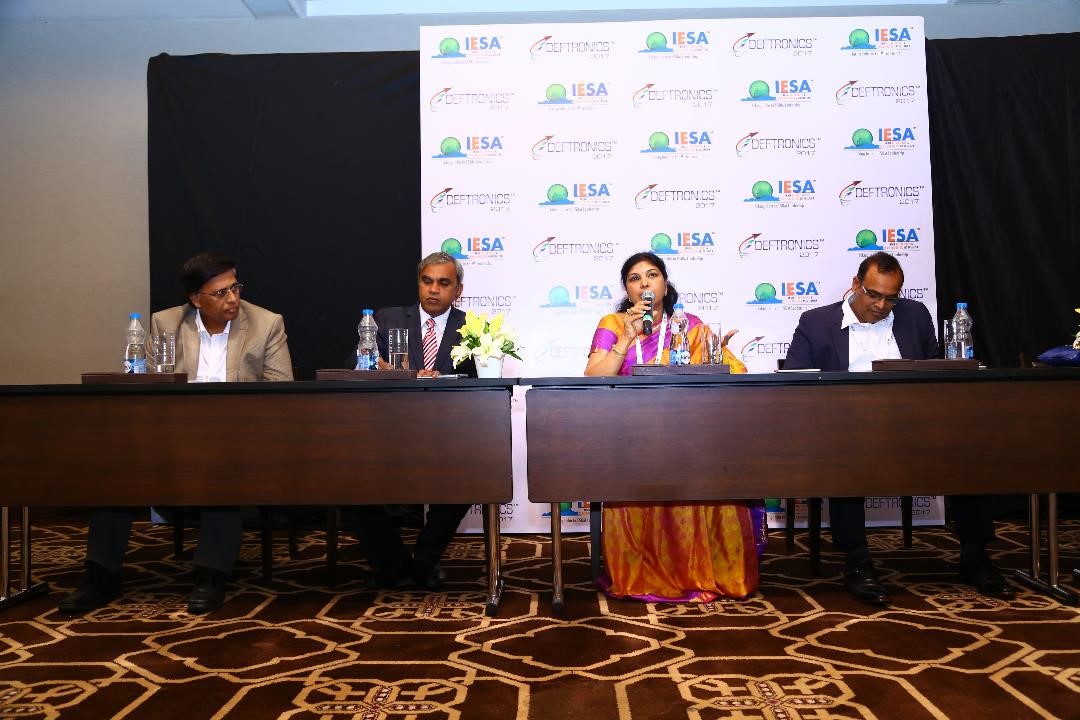 The chief Guest for the event Sh. KT Rama Rao, Hon’ble Minister for Information Technology, Municipal Administration and Urban Development, Government of Telangana graced the event with this presence and also shared his vision for the State.

The guests of honors included Sh. Dr. G Satheesh Reddy, Scientific Advisor to Raksha Mantri, Shri Rajib Kumar Sen, Economic Adviser and In-charge DOMW, MoD, Sh. T Suvarna Raju, CMD, HAL and Sh. B N Kalyani, Chairman, Kalyani Group. The keynote address was given by Sh. Amit B Kalyani, Executive Director, Bharat Forge and Special address by Dr. AS Kiran Kumar, Chairman, Space Commission; Secretary, Dept. of Space; Chairman, ISRO over video message. The speakers highlighted the importance of transforming India into a knowledge based economy and bridging the skill gap with the private and public partnerships to generate more employment. They also discussed the various implementations by the Government of India that would provide a supporting hand in smoothening this transformation.

Speaking at the event, Ashwini K Aggarwal, Chairman-IESA, said “There are clear green shoots in the Indian ESDM manufacturing space….we have seen some of the modern EMS factories come in, we have a 4500 cr solar fab project commercially operational in Gujarat,  there is a dramatic shift of mobile manufacturing into India….With increased number of projects being initiated in a very short time, the release of grants of earlier mSIPS applicants & significant policy decisions – there is a changing supply-chain dynamics in the Indian A&D markets. Along with the early manufacturing initiatives, we are seeing a wave in the startup and innovation ecosystem in the country.  We are proud that DEFTRONICS is delivering an accepted sector platform to the industry and government stakeholders – and is enabling industry wide networking and catalyzing the thought platform for scaling up growth in these strategic sectors”.

Commenting on the occasion, M. N. Vidyashankar, President, India Electronics & Semiconductor Association said, “India currently is the 5th largest A&D market in the world. However, it significantly relies on import to meet 70% of its defence needs. However, the defence industry in India is now at an inflection point and we strongly believe that our efforts in defining the manufacturing landscape of the A&D market has a huge role to play in this progress. We will continue to channelize our efforts towards building on this growth and aim to make the Indian A&D market one of the largest producers in the near future.”

India’s position as one of the world’s largest arms importer is likely to change with the Indian Government’s policy to boost local defence manufacturing by effectively picking industry champions that would tie up with foreign players to make submarines, fighter jets, helicopters and armoured vehicles. Under the “Strategic Partnership” model, Government will shortlist and pick Indian companies to join forces with foreign firms. Foreign firms will share technology with local players and manufacture in India and in turn will be guaranteed a part of the $250 billion defence outlay over the next decade. This opens up manifold opportunities for private players, even those in niche segments, to partner up and pave the path forward for self-reliance in defence manufacturing.

DEFTRONICS 2017 will provide a definitive path towards making the Indian defence industry a self-reliant industry.